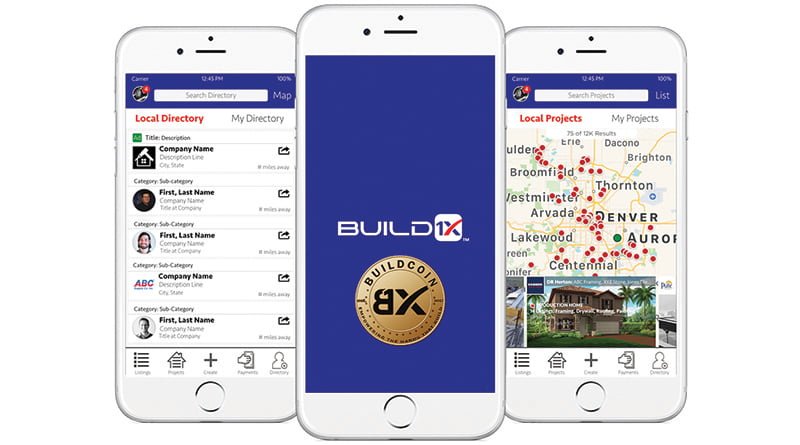 Any contractor who has ever been frustrated by the time it takes to pay subs after receiving funds from a client may have wished for a way to just transfer funds immediately. A Denver-based company is developing a platform that aims to make that a reality.

Trac Stephenson, founder of BUILD1x, said he started his company to do three things: “help people connect, help them communicate better and help them get paid faster.”

At the heart of BUILD1x is a mobile app that lets builders connect with trade professionals and transfer payments in real time. The application was released for beta testing in early May among a limited number of builders in the Denver area.

“Most people are shocked that something like this hasn’t existed until now,” Stephenson said.

Stephenson, who also runs a framing company in addition to BUILD1x, said his customers don’t find him from the Yellow Pages or Angie’s List, “but from existing networks and word of mouth and literally driving around looking for opportunities.”

Stephenson aims to consolidate those opportunities in the app.

BUILD1x’s goal of getting contractors paid faster was limited by the structure of the banking system.

“Payments typically go from peer to peer and likely to a third person,” Stephenson said. Because it takes banks a few days to clear a transaction for payment, that peer-to-peer-to-peer system took a long time.

“If I’m sending you money and then you’re going to pass it on to a third person, the money is not effectively in your account for forwarding until 24 to 48 hours” later, Stephenson explained.

When he started building the platform, the only options for online payment partners were PayPal, Stripe and Dwolla, but those platforms were limited by the ACH bank transaction system, too.

“In construction, if I’m a framing business and I pay a crew leader, and then that crew leader has to pay his five guys, that ACH delay is not a solution that works for us,” Stephenson said.

Distributed ledgers share data for a transaction simultaneously across a network of computers. Because data is shared across every node, and each data segment (or block) is linked to the one before and after it, it’s extremely difficult to tamper with information.

“We looked to blockchain and created our own digital currency to facilitate these peer-to-peer-to-peer transactions basically in real time,” Stephenson said.

Digital currencies, also called cryptocurrencies because the transaction data is encrypted, can be volatile, so some users may not be comfortable transferring money this way. The platform also integrates with Stripe so users can conduct transaction in dollars as well as BUILDCoin.

“Each user account can be integrated with their bank account, and you can pick and choose whether [a transaction] will be in fiat USD or in BUILDCoin,” Stephenson said. Builders who want to try BUILDCoin will be able to purchase tokens through an initial coin offering that is expected to begin this summer. An ICO is similar to an initial public offering, when private companies begin selling shares on the stock exchange. However, instead of owning shares of a company, investors will own units of BUILDCoin, with which they can make payments on the platform.

One thought on “BUILD1x to launch digital currency, mobile app”