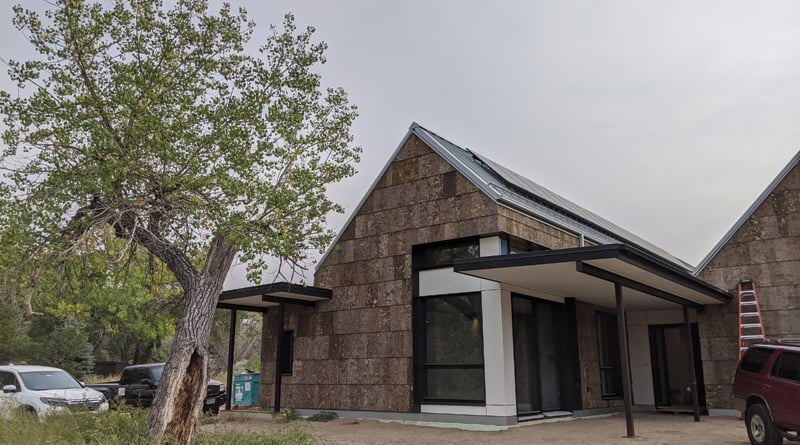 Somehow, the novelty of a sunny, 90-degree day followed by snow and gray skies never fully wears off, even for long-time Coloradans. It can be a problem for owners with inefficient homes, though.

Passive house construction originated in Germany, and is a way to build homes that use as little energy as possible, without sending homeowners running for warm socks or hand fans when we have those 60-degree swings in temperature. In the spectrum of green building approaches, it’s helpful to think of passive house as a standard rather than a certification, says Mariana Pickering, co-founder and chief executive officer of Emu Systems, which provides passive house training and consulting for builders.

“The way I describe passive house to folks who are unfamiliar with it is that it’s less like a certification scheme like LEED, and it’s more like a building code. It’s just a very strict and stringent, advanced 20, 30 years beyond [today’s] building code,” she said.

The main components of the passive standard are the building envelope and mechanical ventilation, which Pickering likens to the skin and lungs of the human body.

“The closer you get to a zero-consumption structure, the more integrated those two things are, [so] they have to be designed in tandem,” she said. “The idea is to really focus on creating an air-tight, thermal-bridge-free envelope, where the interior air quality is filtered with fresh air constantly.”

Pickering said that “passive is often used as a pathway to net-zero,” noting that net-zero is “an energy balance system” that uses renewable energy to meet a home’s energy load. Passive is a way to reduce that energy load on the front end, she said.

Coloradans have an appetite for green standards. We led the nation in LEED-certified space in 2019, and have been in the top 10 states every year since 2010, according to the U.S. Green Building Council. Colorado was one of the first states to have a renewable energy standard and has invested over $3.7 billion in solar infrastructure, according to the Solar Energy Industries Association.

“This is a beautiful climate for achieving passive house,” Pickering said, thanks to plentiful sun and cool nights.

The arid climate helps, too, according to August DeLarue, owner of DeLarue Building Company. “You do have areas that get a ton of snow, where you have more moisture in the air, but usually, all across the state, it’s pretty consistently dry.”

Colorado’s oft-touted 300 days of sun are great for using solar as an energy source, but mean builders have to think about how the home is oriented on the site.

“You could have way too much sun and bake yourself out of a room or a house, even if it’s 20 degrees or zero degrees outside,” he said.

Pickering noted a cultural element that makes the passive house standard ideal for Colorado homeowners, especially those who live farther away from city centers.

“A lot of people in Colorado intuitively like [the] concept. It supports the whole mentality of being off grid or being self-reliant,” she said.

Pickering and her team at Emu Systems believe that passive house is “the building code of the future” because it provides a third-party verified minimum standard for the home’s quality. “It’s just raising the bar, basically,” she said.

There is a learning curve for builders who are new to passive. For one thing, integrating the design and build processes is key to working efficiently, Pickering said. Similarly, with labor already so constrained, finding trade partners who are familiar with passive building concepts can be tricky.

There are “a lot of trades that don’t want to put the extra work into learning what they need to do, which might cost a little bit of money,” DeLarue said, “so you have to find that special partner who is willing to take that journey with you.”

Pickering suggests that builders develop a clear value proposition for the whole home’s performance, instead of presenting homebuyers with a list of products and each cost. For example, windows are a critical part of a home’s building envelope that can “make or break the performance of this project.” However, when buyers see what’s going into the home, “inevitably, they’re going to see the window line and say, ‘Oh, I can’t spend that on windows.’”

“The biggest hurdle for builders is really changing the mentality from the way they’ve always sold budgets to clients, to thinking of themselves more as a product designer,” she said.

Cost sensitivity is a persistent challenge DeLarue has encountered.

“It all starts with the owner. Their major hurdle to [passive housing] is it has some extra costs,” he said. Not every owner has the means and passion to build a passive home. “I think most people choose to have their kitchen be a custom kitchen versus adding a staggered stud wall and having an extra four inches of insulation.”

Colorado has a history with passive building techniques, but Pickering of Emu Systems pointed out that the passive solar standard that has been present here since the 1970s is different from the passive house standard.

The two share “a lot of the same kind of concepts, especially in design — orientation stuff, and shading stuff and all of that — but the passive solar movement was not actually a set of performance criteria,” she explained.

A passive solar home uses the home’s orientation and materials to reduce the amount of energy needed to heat or cool it, then uses solar to generate the energy to meet that load, according to the U.S. Department of Energy.

“The passive standard is really assigning numbers and metrics to that, like you would have in a building code,” Pickering said. A new path to sustainability What the WFH era means for new home builders