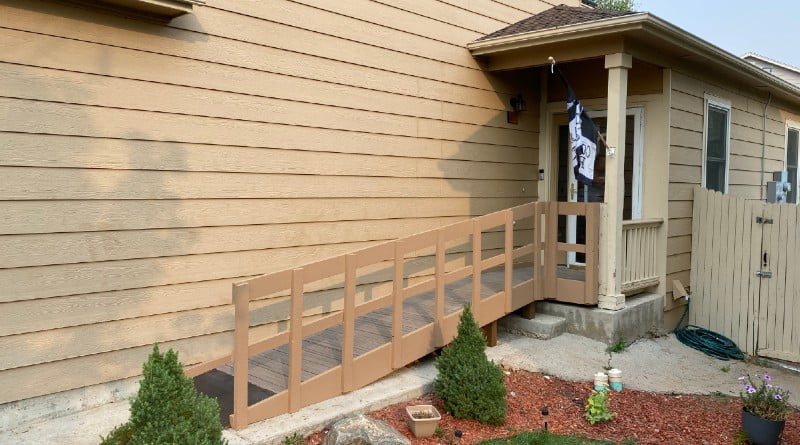 Home Builders Foundation kicked off its 10th Annual Blitz Build last week. More than 100 volunteers and sponsors came together this year to build ramps for people whose homes don’t meet their accessibility needs.

Because of social distancing measures required to limit the spread of the COVID-19, HBF had to work with smaller crews than in years past, and wasn’t able to take on as many projects as it normally would.

“We had to scale back from the 25 ramps we typically install during a three-day Blitz Build,” Beth Forbes, executive director of HBF, said in a statement, “but we didn’t want to forgo the event itself, as it is such a great way to enhance independence and safety for these families.”

HBF and its volunteer crews built 15 ramps for 12 recipients throughout the Front Range over the course of the Blitz Build. One of those crews was led by Brady Nelson, division manager Rio Grande.

Nelson’s crew built ramps for Darren, a veteran with spinal stenosis who uses a wheelchair.

“He had some ramps to get into his house, but they were really, I’ll use the term sketchy,” Nelson said. “Probably a better term for that is they were makeshift, and they were pretty unsafe.”

Darren and his family would move the ramps between different doors so he could get around the house, Nelson said. The crew built a ramp with a landing off the front door so Darren could safely open the door from his chair, as well as a ramp exiting through the garage.

Due to the pandemic, Rio Grande had to work with a smaller crew to limit exposure. Nelson said he also tried to build a crew of people who were already working together day to day, “then, of course, we wore masks and did the social distancing the best we could.”

Rio Grande already has safety procedures in place for working through the pandemic, so working on the project wasn’t overly burdensome.

“It definitely made that a little bit more of a challenge, but we’re already living that every day so it really wasn’t much different,” he said.

The average cost to build a ramp is over $3,500, according to HBF, but thanks to volunteers and donations from sponsors, recipients didn’t have to pay anything. This year’s Blitz provided ramps valued at $50,000 at no cost to recipients. Customization is key for kitchen remodels in 2019 One thought on “HBF perseveres through pandemic for 2020 Blitz Build”