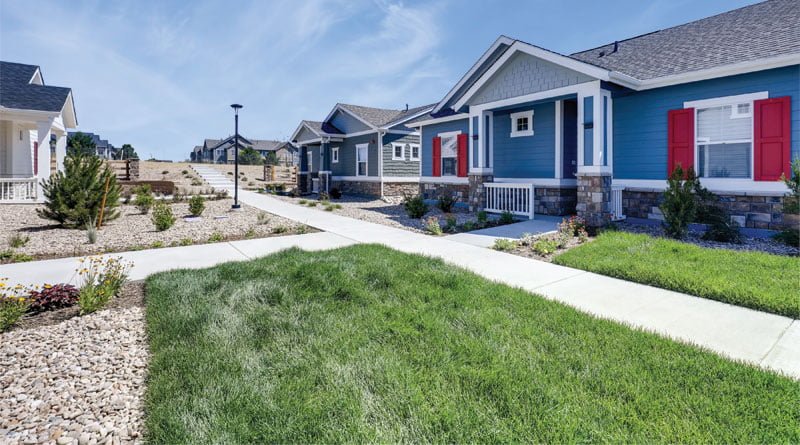 NexMetro has three communities in Colorado: Buffalo Run in Commerce City, Prairie Center in Brighton, and the new Eastlake in Thornton, expected to open in early 2020 (Photo: NexMetro)

Single-family housing is by far the most popular type of housing in the United States. According to the American Community Survey, nearly 62% of Americans lived in a single-family detached home in 2017, a percentage that has held steady since at least 2009.

Even in the rental market, where multifamily reigns, single-family housing has a respectable hold: 35% of renter households lived in a single-family home, according to ACS data.

Around the country, large builders are experimenting with increasing the share of single-family rentals. Lennar announced on a second-quarter earnings call that it will be the builder for a rental-only neighborhood in Florida, while in the West, Toll Brothers and Taylor Morrison have announced their own forays into the rental market.

Despite these large builders leading the charge on single-family rentals, Robert Dietz, chief economist at the National Association of Home Builders, reminds builders that single-family homes built specifically for the rental market still account for a small share of total housing inventory.

“There are some who believe this is a really significant part of single-family disruption, and it’s just not,” he cautioned in an interview with Colorado Builder.

“It’s not quite doubled over its historic norms, so you can easily view it as elevated, but it remains a small share,” he said.

Meanwhile, multifamily housing, where typically 80% of starts are earmarked for rentals, increased to about 95%, Dietz said.

“That part of the market really has moved in a very significant way to being essentially almost entirely dominated by rental,” he said.

Affordability is one factor in the increased interest in rental housing, Dietz noted.

“The biggest issue in housing over the last year, year and a half, has certainly been the housing affordability crunch that kicked into the marketplace last fall and ended in the spring,” he said. “We saw a bit of a reversal on housing demand, where the for-sale side of the market weakened and the demand for rental units has grown.”

Some builders may be dissuaded from building rental communities by worries about the return on their investments, according to Devyn Bachman, a research manager at John Burns Real Estate Consulting.

“I’ve seen in a number of the earnings calls … a lot of chatter about these big announcements,” Bachman said in an interview. “The answer from a lot of the builders is that it’s very hard to make the numbers work because land is so valuable and so expensive that it’s really hard to turn it into a rental asset because the return is not there that they could get if they sold a home.” Builders are within their rights to require employees to get COVID-19 vaccinations, but they should lay out a clear and concise plan.

4 ways builders can be more profitable