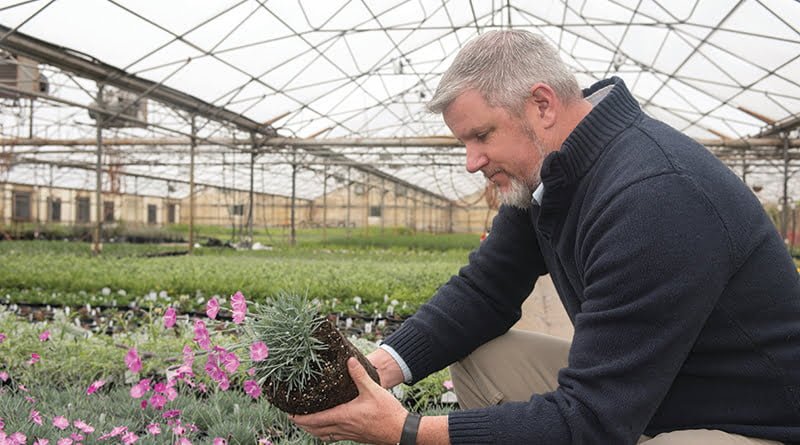 Most people consider the nursery industry “mature,” according to Matt Edmundson, president of Arbor Valley Nursery in Brighton. It doesn’t have the rapid growth of, say, the tech industry, and “the way it’s structured is very basic and unevolved compared to other industries.”

It’s also fragmented, Edmundson explained, meaning there are a lot of growers in different parts of the industry that don’t know what other producers are growing and aren’t really connected with their customers.

“The nursery business is often run by small, family-run businesses that don’t always talk to each other or look to innovate all that much,” he added.

Arbor Valley is working to change all that, and is taking lessons from other industries to drive change in the nursery business.

The nursery industry evolved primarily to serve the retail channel, Edmundson noted. It’s only in the past half century that the distribution channel has grown to serve professional landscapers.

“In Colorado, it’s really been the last 30 years, which is primarily how landscape contractors get their stuff,” Edmundson said.

He believes that’s due to change, though, and expects to see distributors supplying retail nurseries as well as professionals. There are just too many pressures on smaller outlets.

“We’re already finding freight rates are going up, and a lot of trucks are just not wanting to pick up nursery stock out of state if they’ve got more than two or three drops,” Edmundson explained.

If smaller garden centers can’t buy enough to keep their shelves stocked, and also can’t get resupplied because they can’t afford the rising freight rates, they “might have to look to local bigger guys like us who can get big trucks in here.”

This is creating a hybrid grower-distributor role that Arbor Valley aims to fill. Dual roles means efficiency is critical to Arbor Valley’s operations, from production to customer service.

“Every commercial job is different … so our mix of what we’re producing is always changing,” Edmundson said. “That’s where our efficiency is really important. Colorado is not the best state for growing young plants.”

If any part of a business’s processes isn’t valued by the customer, it’s a waste of resources for the company. Arbor Valley took inspiration from the manufacturing industry and is certifying one of its staff members for Lean Six Sigma.

Lean Six Sigma looks at “efficiencies and process and what are the types of things that add value to your customer,” Edmundson said.

Lean Six Sigma consultants can help a business get in shape, but Edmundson said having someone on staff who can continually monitor the company’s processes “is something that, although the customer may not see that, it keeps us as lean and mean as possible and competitive in the marketplace.”

He hopes that the efficiencies in place in Arbor Valley will help his customers be more efficient in their businesses as production cycles and delivery times are streamlined.

“If we can continuously improve in that situation, we can create a real competitive advantage for our customers,” he said. “The last thing we want is to take advantage of growing but then basically grow ourselves out of business because we can’t continue to live up to the expectations of our customers.”

Arbor Valley caters to larger, commercial landscapers. Those types of firms usually don’t partner with wholesalers, Edmundson said, preferring to work directly with growers since their size justifies buying directly from the producer.

“If you’re a grower in Ohio, three-quarters of the population of the country is within a five-hour drive of Ohio. There’s a lot more density; not just of population, but of producers,” Edmundson said.

For Colorado growers, the next major market is Kansas City, Missouri, or Albuquerque, New Mexico. California and Oregon are a two-day drive away. Are Your Landscapes Elevating Your Clients’ Well-Being?