Construction jobs continued their steady recovery in the first quarter of 2021, rising more than 13% in January from the pandemic low in April.  After a slight decline in February, jobs in March reached 7.46 million, just 1.2% below the March 2020 level. 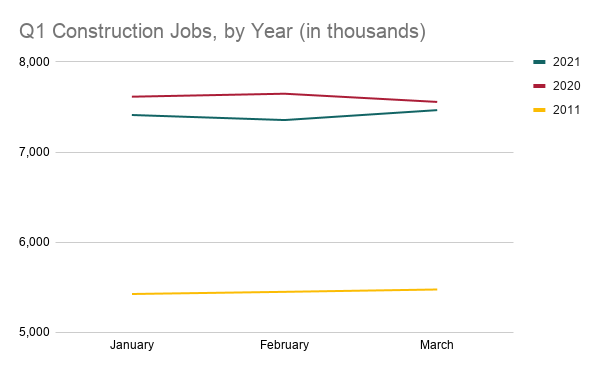 Jing Fu, director of forecasting and analysis at the National Association of Home Builders, cited extreme weather in many places around the country that contributed to lower construction job numbers in February.

Construction unemployment in March was an estimated 8.6%, down a full point from February and down from 9.4% in January. Overall unemployment followed a slow downward trend in the first quarter, from 6.3% in January to 6% in March.

“Here comes the tsunami of economic and employment growth across America,” Anirban Basu, chief economist of Associated Builders and Contractors, said in a statement. “With more stimulus on the way, the United States may end up growing faster than China this year, which would be the first time that occurred in decades.”

Most of that growth will benefit the heavy and civil engineering sector, Basu said, as much of the anticipated stimulus is expected to be directed toward infrastructure. Indeed, heavy and civil jobs accounted for almost 60% of the increase between February and March. However, “the sheer volume of money flowing into the economy is set to create massive forward momentum for the balance of 2021 and likely through 2022,” Basu said.

In Colorado, construction jobs fell slowly in the first quarter, from 172,700 in January to 172,500 in March, BLS data show. March jobs are down 4% from the start of the pandemic in March 2020. Overall unemployment in Colorado was at 6.4% in February and March, continuing its steady recovery.
target=”_blank” rel=”noopener”
Related: Unemployment continues to haunt Colorado

“It will take more than nice weather for the construction industry to keep adding jobs this year,” Stephen Sandherr, CEO of Associated General Contractors of America said in a statement. “Investing in infrastructure, avoiding needless new regulations and counterproductive tax hikes, and fixing the supply chain will help the industry create many more high-paying construction career opportunities over the coming months.” 4 Ways Through the Construction Labor Shortage