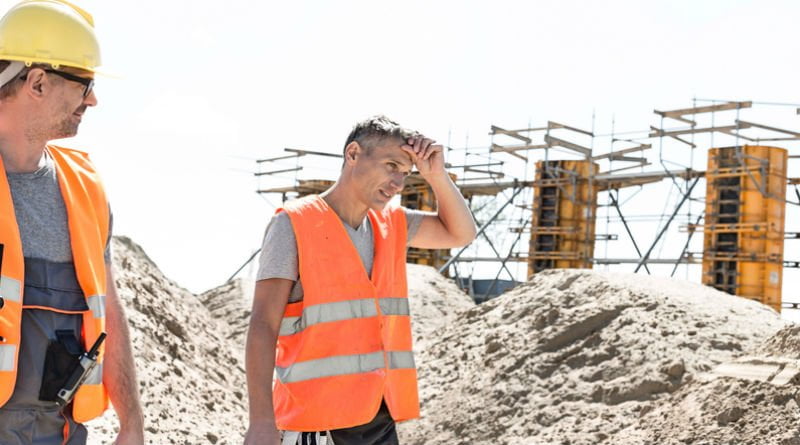 OSHA doesn’t have a specific heat-related standard, but it does require that employers protect workers from known safety hazards. (Photo: Photographerlondon, Dreamstime)

In 2016, over 700 people statewide were sent to the emergency room for heat-related illnesses, according to the Colorado Department of Public Health and Environment (DPHE). Bureau of Labor Statistics data from 2010 show that nearly 4,200 people missed work due to injuries or illnesses caused by heat exposure, and 40 people died from exposure.

The Occupational Safety and Health Administration doesn’t have a specific heat-related standard, but it does require that employers protect workers from known safety hazards, including those caused by their environment. As temperatures climb in Colorado, builders should review their safety plan to make sure they adequately address extreme heat.

“Workers who are exposed to extreme heat or work in hot environments indoors or outdoors, or even those engaged in strenuous physical activities, may be at risk for heat stress,” according to the National Institute for Occupational Safety and Health (NIOSH). In 2016, the agency released an updated “Criteria for a Recommended Standard: Occupational Exposure to Heat and Hot Environments” to address the impact of heat exposure on workers.

In mid-July, a consumer advocacy group, Public Citizen, and several other stakeholders petitioned OSHA to issue a standard to protect workers from extreme heat.

“Despite NIOSH having issued three separate ‘Criteria for a Recommended Standard’ documents for heat stress,” the petitioners wrote, “OSHA has never promulgated a federal standard to protect workers from heat stress.”

The petition calls for a standard based on NIOSH’s 2016 criteria, including mandatory rest breaks, PPE that specifically addresses heat and an acclimatization plan, among other things.

Extreme heat can lead to a series of illnesses, the most serious of which is heat stroke. Heat stroke is when a person’s core temperature rises enough to disrupt the central nervous system and leads to unconsciousness or seizures. Look for dizziness or nausea, headache, a fast pulse and confusion as symptoms of heat stroke.

There’s a common perception that as long as a worker is still sweating, they’re not in danger heat stroke. However, NIOSH notes that with exertional heat stroke, workers will often continue sweating.

Workers who show signs of heat stroke need immediate medical attention, including calling 911 and taking steps to cool down the sick worker, such as removing PPE or extra clothing, moving them to a cooler place and applying cold, wet cloth or ice to the head, neck, armpits or groin.

Heat stroke is frequently preceded by heat exhaustion. Symptoms of both include headaches, nausea, dizziness, feeling weak, irritability and dehydration. NIOSH notes that some workers may continue to perform well even while suffering symptoms of heat exhaustion.