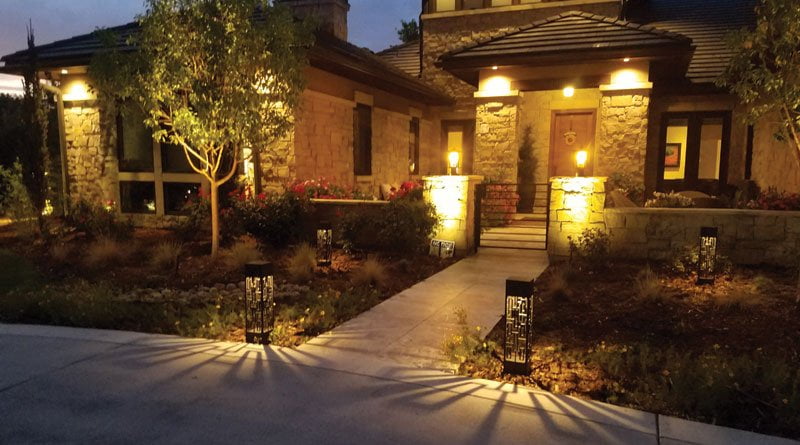 One of the defining trends in lighting design over the last 20 years has been to take a less-is-more approach, according to Mead Noss, owner of Outdoor Lighting Perspectives of Colorado, a branch of a nationwide company with over 60 locations.

Many homeowners and builders used to think of “outdoor lighting as carriage lighting, so a lot of homes were basically plastered across the front … with carriage lights,” Noss said.

Over the years, consumers have opted for more subdued soffit lighting, he noted, but “a lot of the HOA regulations and architectural covenants have also changed. There are a lot of dark-sky lighting covenants with some of the major communities such as Genesee and Castle Pines Village.”

“Coloradans tend to be more environmentally conscious. They don’t want their house to look like a property on the Las Vegas Strip,” he noted.

He added that homeowners, for the most part, have embraced LED lights, despite their higher initial cost.

“We still have a few holdouts and customers who just don’t want to spend the money on LEDs, but it doesn’t make a whole lot of sense because the savings they have with the lower energy and electric bills more than pays for the initial cost of retrofitting to LED. In most cases, it’s less than two years,” he explained.

Noss described some other trends that are taking root in Colorado, and one that probably won’t get much traction, despite its popularity elsewhere.

Festival lighting. It goes by many names, but string lights are a popular tool for lighting designs that invite homeowners and their guests to gather.

“Some people refer to it as bistro lighting or festival lighting,” Noss said. “Now that we can install that in low voltage and LEDs, we can tie that in with their regular landscape lighting systems.”

He added that technology has helped eliminate one of the other main objections to LED lighting—the garish blue light.

“We can get it in any color temperature, so we can make everything look exactly as it looked with the halogen bulb technology,” he said.

Sculptural bollards. Noss has seen increasing interest in bollard lights that incorporate an architectural flair. He noted they can be a little pricey, so “we don’t install a ton of them, but they’re basically dark-sky compliant, and they have interesting cutout designs on the side so you get useful light.”

Color-changing lights. Noss noted that customers at OLP offices around the country are asking for color-changing LEDs or dimming capabilities in their outdoor lighting designs, but his customers are uninterested or outright opposed to it.

“I’m not sure that the RGB color-changing LEDs and things like that are going to ever become popular in Colorado,” he said. “We’ve even had customers say, ‘I don’t want this RGB lighting. I just want the lighting that you did for me at our last house. We want it to look natural.'”