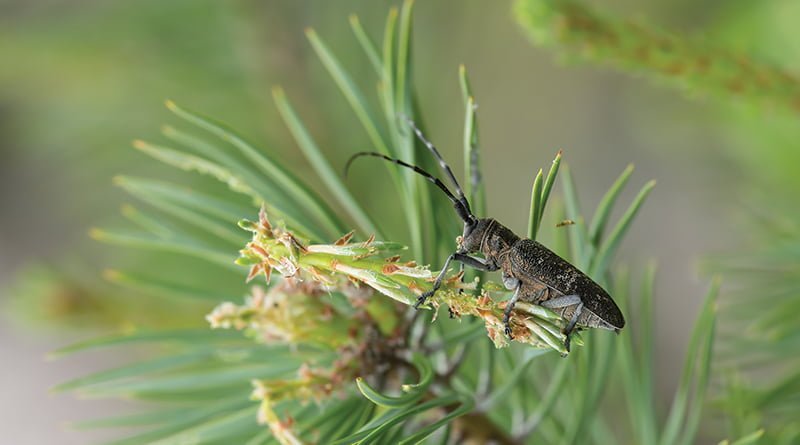 Wilt disease is spread by pine wood nematodes that hitch a ride on the pine sawyer beetle.

Long summer months and hot, dry weather create environmental stresses on Colorado trees. But for exotic planted species like Scots and Austrian pines, pine wilt disease is a new threat now contributing to tree decline and death in isolated incidents around the state.

Pine wilt disease, transmitted by the pine wood nematode (Bursaphelenchus xylophilus), has recently been impacting Colorado’s introduced landscape pines. It is carried from tree to tree by the pine sawyer beetle (Monochamus spp.), with the nematodes colonizing trees through ovipositor or feeding wounds made by the beetles. This disease may go unnoticed due to symptom presentation similar to that of other abiotic or environmental disorders: the appearance of gray-green needles in the upper canopy or on isolated branches in larger trees, needles later turning straw colored, tree decline and eventual death.

[Related: Why diversity matters to trees]

Pine sawyer beetles carry the pine wood nematode to the host tree around May 1, with symptoms observable within two months. Death may occur in the fall or by the following spring. The nematodes colonize resin canals and block water-conducting xylem tracheids, leading to rapid tree wilt and death. After the pine sawyer larval and pupal stages grow within the wood, the adult beetles emerge to feed on new host trees, carrying the nematode and wilt disease with them.

Although common on the Great Plains, Colorado’s first confirmation of pine wilt disease in a Scots pine was observed in 2006 along the Front Range. According to the Department of Bioagricultural Sciences and Pest Management at Colorado State University, there were five other confirmations in 2011—also in Scots pines. In 2012, the disease was confirmed in 10 Austrian pines and another 10 Scots pines in new locations in Mesa and Prowers counties. More recent confirmations in 2017 yielded 15 Austrian and three Scots pines with the disease.

Laboratory sampling is needed to confirm the presence of pine wood nematodes. For the CSU Plant Diagnostic lab, a 2- to 3-inch diameter branch approximately 12 inches in length, cut from right up against the trunk base, is suggested. Multiple samples from one tree are encouraged.

Sanitation plays a significant role in dealing with this disease, with wilt-killed trees being removed and preferably stump-ground before the May 1 pine sawyer emergence. Diseased wood should be chipped, burned or buried before beetle emergence. Do not move logs or firewood if pine wood nematodes are confirmed.

Donna Davis is an urban and community forestry specialist for the Colorado State Forest Service. She holds Certified Arborist and Tree Risk Assessment qualifications from the International Society of Arboriculture; is a 2018 Municipal Forestry Institute Graduate from the Society of Municipal Arborists; and is a member of the ISA, Society of American Foresters and Colorado Tree Coalition. A fungi way to protect plants