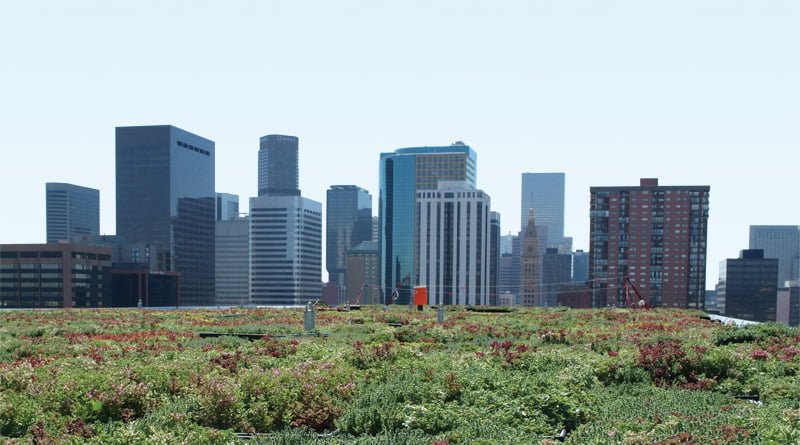 In November 2017, Denver voters approved by over 54% an initiative that would have required new buildings and roofs over 25,000 square feet to be covered to some extent by a green roof. The Green Roofs Review Task Force released a draft policy in mid-June that outlined in more detail how a final regulation might look.

On Oct. 29, Denver City Council voted unanimously to approve the amendments suggested by the task force. The ordinance requires most buildings to install a combination of a cool roof and other improvements, such as a green space, solar or other renewable energy, or paying into the green building fund.

Andy Creath, founder of Green Roofs of Colorado in Denver and a board member for the Green Infrastructure Foundation, is optimistic about the impact the ordinance will have on the local industry.

“It’s specialized and it’s all local,” Creath said of the initiative’s reach. “It’s all designers and landscape architects in Denver Metro who are going to be getting this work because it’s a very site-specific and very location-specific rule.”

The ordinance provides landscape architects, designers and contractors with new opportunities, but there are special considerations for designing these types of projects.

One of the challenges with installing green roofs on existing buildings is that they may need structural upgrades to support the weight of a green roof or to prevent drainage problems, according to Colorado Springs-based landscape architect Kristin Heggem.

Creath added that “the structural stability of the building, proper drainage and a really well-defined waterproofing membrane are the first three things we look at on any project.”

Heggem said the design process “usually starts with the owner, of course, and finding out how they want to program the space. What do they envision? What kind of project is it?”

For example, multifamily buildings may use green-roof space for exercise stations, dog walking areas or outdoor kitchen and dining spaces, she said. An office building may want shaded areas where workers can take breaks.

Once the client’s vision for the space is outlined and the budget is nailed down, Heggem said it’s important to think about the accessibility of the space, not just for the end users but for the contractors who will need to get materials to the roof. Designers should also think about how maintenance workers will access the space throughout the lifespan of the green roof, including the landscape maintenance workers who will tend to plants and any building maintenance crews who might need to access air conditioning units or other rooftop structures.

Furthermore, cities will often use “an expedited approval process if you include a green roof in your plan,” Heggem said.