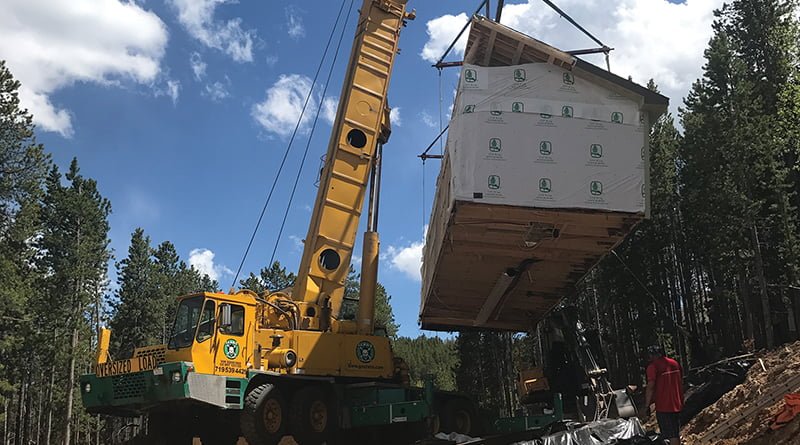 With system-built homes, entire rooms are finished off site and craned in. (Photo: Modular Sure Site)

In the West, less than 1% of homes built in 2017 were completed using modular or prefabricated processes, according to the Census Bureau. Nationally, modular building accounted for just 2% of single-family homes completed last year.

That’s in spite of clear benefits to builders. A 2011 report by McGraw-Hill Construction found that two-thirds of projects built with modular or prefabricated processes finished early, including 35% of which that finished four weeks or more ahead of schedule. Over three-quarters cut the amount of waste generated at construction sites and 66% cut their budgets.

Modular homes are built by craning finished rooms into place on a foundation. Rooms are built in a factory where walls, floors and ceilings are attached, and wiring and plumbing are put in place, along with finishes like carpet and paint. At the site, a whole house can be set in eight to 12 hours, according to Audree Grubesic, president of Modular Sure Site, a general contractor for modular homes.

Panelization is a similar process. The panels are built in a factory and shipped to the site, where the builder will put them together and do all the interior finishes. Because the building process is tightly controlled in the factory, quality control can be closely monitored.

Grubesic likes to describe these processes as “off-site construction” because most people will think of mobile homes when they learn about modular construction. There are significant differences, though.

Mobile homes are built to codes set in the Department of Housing and Urban Development (HUD) Manufactured Home Construction and Safety Standards Act, according to Grubesic. Modular homes are built following the International Residential Code, just like traditional homes.

The distinction between mobile and modular isn’t just important to consumers. Lenders see the value, too. Because modular homes are built to IRC standards, they can be appraised similarly to traditional structures.

“The banks and lenders I’m talking with are opening new product lines for modular,” Grubesic said. Banks “know exactly what the dollar amount is going in and out” of the project, so more lenders are willing to consider financing a modular project.

Loans are smaller, too. Grubesic said that site work on a 1,500 square-foot modular build typically takes between three and six months to complete. Connecting to utilities, water and sewer systems can also affect how quickly site work is completed.

When Grubesic started her business, the builders she was working with were putting up 10 to 15 modular homes per year. “Now they’re doing between 40 and 80,” she said. “People are getting more savvy about building” these types of homes.

“They’re basically considering both and expanding their business to encompass different opportunities so that when we have a market shift and we’re not building as many houses, they can still sustain their business because they’re not doing one type of build,” she said.

Although modular or manufactured homes may call to mind cheaply built double-wides, Grubesic noted that she’s seeing the greatest interest among affluent homeowners who want to build on land in mountain towns around the state.

“Instead of spending $500,000 in the Denver area and getting a 1,200 square foot house, they’re going out to Pine, Conifer, Colorado Springs, Adams County, and building homes that are double the size and costing about the same,” she said.

Correction: This article has been updated to clarify the typical time it takes to complete a modular build. An inside look at a modular factory The modular mindset expands in Denver